In 2007 RATUM became a prize winner of the “Golden Mercury-2006” National Award at the regional level in the nomination of “The Best Small Enterprise Providing Legal Services”. In 2006 RATUM became a diploma winner in the same nomination.

In 2009 RATUM became a prize winner of the regional contest “Top Company of Small and Medium Business in Kursk region – 2008” in the nomination of “Audit. Law Practice. Teaching”, organized by the Administration of Kursk region.

In 2010 RATUM became an award winner of the 10th Interregional Wholesale and Retail Fair “Kurskaya Korennaya Yarmarka”. According to “PRAVO.RU-300 rating results” RATUM has the 4th rating position in the list of the “Best Regional Law Firms” operating in Russia and is one of the Top-100 “Best Law Firms” in Russia.

In 2011 according to “PRAVO.ru rating results” RATUM is in the list of the TOP-50 “Regional Law Firms” in Russia.

The information about the best law firms of Europe appears annually on its pages. On its website Ratum is defined as the Law Group that specializes in providing legal services in the agricultural sector.
http://www.chambersandpartners.com/17186/852/Editorial/7/1#22765959_editorial 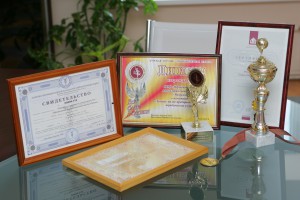